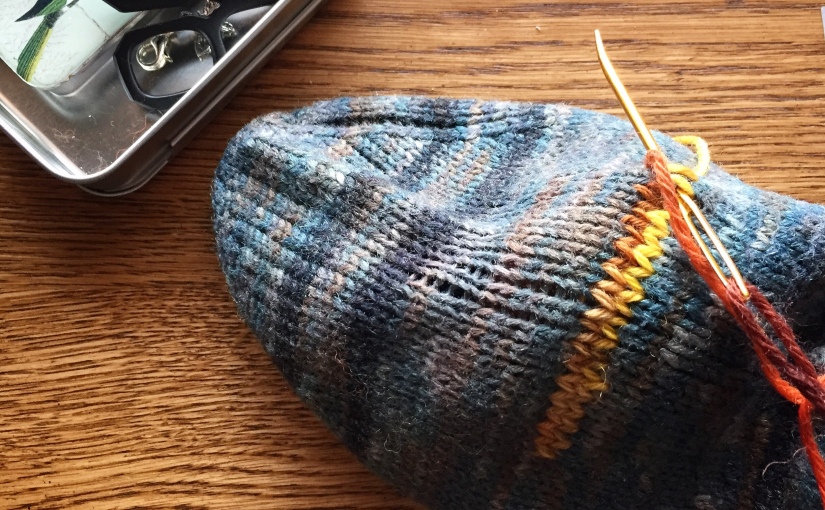 Sometime toward the end of last week it became apparent that almost half of Mr. Knitting Sarah’s handknit socks were starting to go threadbare. When it rains, it pours, right?! I mentioned to Mr. KS that I’d started another pair, but that he might need to supplement with some ready-to-wear socks. He informed me that he’s totally converted to handknits and doesn’t intend to go back. I was kind of shocked because I thought he might be kind of ecstatic at the chance to integrate some RTW socks into his rotation, but as a knitter I knew I needed to jump into action. That one pair of socks I was working on was not going to cut it! I needed a new plan. I knew it was time to get darning!

I spent the first 2 days of the great sock repair extravaganza of 2019 (which included a whopping 4 pairs of socks) working in Swiss darning. “Swiss darning” is the same thing as duplicate stitch, for those who weren’t aware. I just think “Swiss darning” sounds way more elegant so I like to go with that name (because I can!). In any case, one pair had a pretty small hole near the toe which was relatively easy to fix. The next pair we decided we would just let nature take its course because the socks are 6 years old and entirely stockinette where Mr. KS prefers a 2×2 ribbing on the top of the foot and cuff for a better fit. It’s weird to relegate them to just be worn until their eventual demise, but we agreed that it was time better spent to work on a new pair that fit better than to prolong the life of this pair.  And so I was down to the last two pairs.

I was reinforcing the foot in each sock as well as areas along the decreases on the toes, all of which were showing a lot of wear. I didn’t have any yarn that matched, so I just grabbed a skein of similar yarn that I didn’t think Mr. KS would want a full pair of socks from. Since the mending would all be hidden within a shoe, the bolder colors would be hidden, after all. After what felt like Swiss darning forever, Mr. KS was ecstatic with the outcome.

I wasn’t really going for pretty with these, just functional. A band-aid for the sock shortage of 2019 and I’m fairly confident they’ll do the trick for a while. I was really concerned that the patches would feel weird or uncomfortable, but Mr. KS assured me they were great and he was very happy.

After darning what felt like a lot of real estate on these, I was curious to try a different technique. Instead of the relative tedium of Swiss darning — as elegant as that name may sound, it is still pretty grueling — what if I would just cut off the worn part of the foot and re-knit the whole thing through the toe? Surely the ability to go into auto-pilot knitting with a basic foot and toe would be faster than trying to neatly Swiss darn 1/3 of the footbed, right? I resolved to try it and compare. I mean, you’ll never know unless you try!

Normally I’d look up loads of tutorials since I’d never tried anything like this. I mean, I’d never cut my knitting for steeking even! But I just kind of visualized what I thought would work and went for it. I’ve probably knit close to 100 pairs of socks at this point, so I am pretty confident in the ins and outs of handknit socks and figured based on the terrible state of this pair, I wasn’t going to make them any worse!

It was surprisingly easy. I used a set of one size smaller DPNs to pick up the stitches just because it made the process a little easier. The variegated yarn also helped me to stay in the correct round when picking up stitches. Since I could literally pick anywhere to start, I chose a round that both stood out from the one next to it and was one consistent color all the way around just to make picking up that much easier. The ribbing was a bit trickier until I knew what I was looking for, but I figured it out. Before I knew it, I had the sock on the needles, the worn foot & toe cut off, and I was knitting it off the smaller needles and back onto my 3mm (Mr. KS prefers sport/DK weight socks, hence the 3mm needles). Easy peasy!

For those wondering, this was the old foot & toe.

You can see it was already darned once and the rest of the knitting was almost threadbare.

I took no scientific measurements because I was just exploring the technique this time around, but I would venture to guess that for this extensive of a mending project it was probably about equal to Swiss darning the whole thing, if not a smidge faster. And the second sock was definitely much faster to get set up and back on the needles. I took a little more time to add some heel reinforcement as well with a little duplicate stitch… er… I mean Swiss darning.

I was already that far into it with the toes, I might as well take some precautions on those heels as well, right?!

And I’m happy to report that Mr. KS loves his mended socks!

I just looked them up on Ravelry and these are also 6 years old! Considering Mr. KS spends 10 hours a day, 5 days a week minimum on his feet and has been wearing this pair regularly for the first 4 years of its life and pretty exclusively in rotation with about 5 other handknit pairs the past 2, they have held up remarkably well, I think! Yes, they are still worn, but the fact that re-knitting and reinforcing might buy another year or so out of this yarn is pretty remarkable. And knitting a couple toes and heels is much faster than knitting a whole new pair of men’s size 13 socks!

And what a great way to use a yarn that’s not exactly Mr. KS’ palette, too!

I’ve been pretty shocked throughout the process at Mr. KS’ enthusiasm for this mending of his handknit socks. Honestly, I always kind of look at him when we’re discussing it, waiting for him to crack a joke about my dedication to such a weird process because there are a lot of things in the knitting and spinning world that he loves that I love, but he himself does not understand. It turns out mending is not on that list. Instead, he explained this morning that he really appreciates the process of not just pitching the socks when they are worn. There’s something special, he said, about giving them a second life. And in that sentiment, there is something that touches my heart.

I’ve come full circle now to see that the mending honors the time commitment of creating the socks in the first place. To give them a little TLC, a gentle refurb, a small time investment in order to let them live a longer life — that’s placing a value on them that I don’t think we consider as much as we probably should when it comes to the ‘things’ in our daily lives. In the throes of the project, it was easy to see it as a tedious task, for me to make comments about how it was a true sign of love to mend because it is so boring. I won’t say mending is my favorite thing in the world to work on, but by the end of this process and by seeing my husband’s enthusiasm for his drawer full of mended socks, I’m looking at it all from a much more zen place. How wonderful that I have the time and skills to be able to take these socks that were essentially a couple weeks away from the trash and breath another life into them. Another season of hiking, another year of toasty toes on the cool floors on spring mornings, another first truly chilly day of fall — another year of handknit socks.

The next time I take on a mending project, I have no doubt that I’ll approach it with more patience, maybe even just a hint of reverence for the time and love this project represents and how mending it is really the way you honor that. I’ll be sure to document it better for all of you, my friends, so you can add the same handy skills to your knitting toolkit. And so that you, too, can discover (if you haven’t already) zen and the art of darning socks.

23 thoughts on “Zen And The Art of Darning Socks”