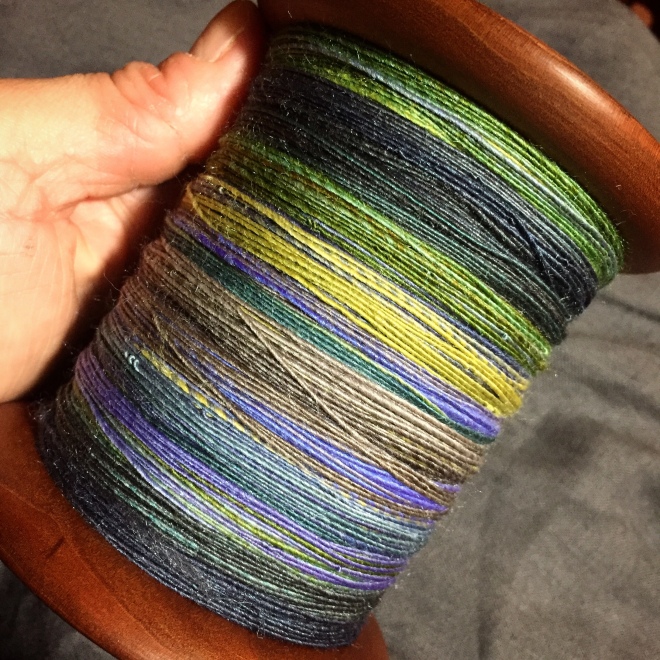 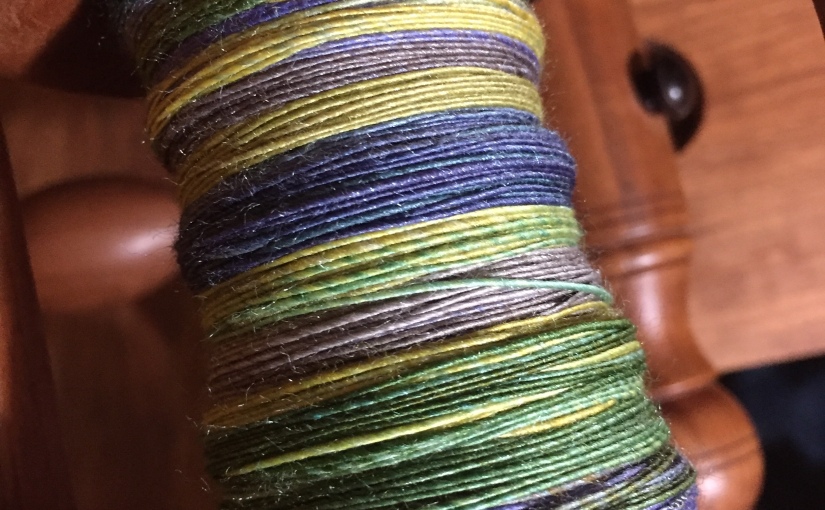 Working my way toward a lighter single tonight.

This year I’m very excited to be taking part in and helping to lead the Three Waters Farm Skill Builder Spin-along. Each month we’ll be focused on a different skill, providing helpful links, q & a, encouragement, and troubleshooting along the way. Not only is this an awesome way to spin some of my beautiful Three Waters Farm fibers, it’s also a fantastic way to really spend some time spinning intentionally, with the goal of gaining a better understanding of my spinning and becoming a better spinner.

Most spinners you talk to will say their #1 goal is to spin a yarn that it could be mistaken for mill spun, or at least something that looks like the control involved could not possibly have been executed by human hands. I’ve got opinions on that as an ultimate goal and how to define a good handspun yarn, but those are for another day. Today I want to start to talk a little bit about how we make that could-be-mistaken-for-millspun yarn.

Consistency, you see, is really the cornerstone of spinning, but contrary to what you might believe that’s not just because it enables you create that elusive mill spun look. Consistency is an indicator of something bigger. The fact that you can spin those nice, even, regular yarns means you have the ability to control the yarn you’re making — you understand the drafting process, how much twist you are adding, and all that good stuff and you can churn out the yarn you want, when you want it.

Most people start by getting really good at one type of yarn and that’s the perfect place to start. Once you learn how to spin a consistent yarn, though, it’s not a huge leap to move on to spinning consistent yarns are varying weights and styles on demand. With practice, you’ll find you have control of the mechanics involved and that you can create any yarn — from something that looks like that mill spun skein to the craziest art yarn you can imagine to the perfect little sock yarn you’ve ever laid your hands on.

That’s kind of a big deal.

And that’s why I’m so super excited that this month in the Skill Builder SAL we’ll be exploring Spinning Consistent Yarns.

As a moderator in the group, I’m very happy to share that I’ll be spinning the featured TWF Calendar Colorway each month, based off the beautiful TWF 2019 Calendar.  Participants are welcome to order the featured colorway for themselves or spin any TWF colorway of their choosing.  It’s going to be a blast!

This month’s colorway is Frosted Daybreak on the Merino/Bamboo/Tussah Silk base.

Confession: I actually have a sweater quantity of this colorway in my stash. It’s pretty freaking awesome and I can’t wait to get going on this!

Today I prepped my fiber. Something that really helps to get a consistent yarn while you spin is fiber prep. Even with a beautiful bag of fiber that is like butter right out of the bag like this, it’s usually a good idea to prepare the fiber before you spin.

Different dyers dye different ways, but most Three Waters Farm fibers arrive dyed with three repeats across the entire length of the fiber. Now, I’m aiming to spin a 2-ply and I want to split the fiber down the middle lengthwise to have 3 nice long color treats in my yarn. Some spinners are superheroes and have no trouble just picking it up, splitting it, and making two even halves.

I am not that spinner.

I do this instead. First, I break the three repeats.

And then, always starting in the middle of each repeat, I split each of the three strips lengthwise.

Why start striping in the middle? Someone along the way gave me that tip and I find it really does work magic and makes it much easier to get even strips.

Now, if I wanted to make the strips smaller here, I could keep splitting. Splitting further can make it easier to spin lighter weight yarns. It just gets you that much closer to your finished yarn and gives you less margin for error as you draft. I’ve split my fiber into as small as 1-2gram strips at times and it’s true – it certainly does help you to reach a lighter weight yarn. Especially for new spinners interested in honing lighter consistent yarns, this is definitely a tip I would recommend.

I tend to be a spinner who splits for color, not to help me achieve a certain yarn weight. I spin across the top of my fiber regardless of the weight of yarn largely because I have never been particularly patient with my prep and I also tend to like larger color repeats. That’s just me.

I could split the colorways even further for color effects like to do something fractal-y — it’s really totally personal preference and what you want the yarn to be. I just want to spin these 6 strips, one after another. 3 on one bobbin, 3 on another. You know why? Because there is nothing scarier to me than trying to match up colors as I ply and I wanted to reach beyond my own comfort zone for this spin. I’m a believer that it’s these little experiments, the subtle forays into the “scary” makes me a better spinner. As long as my spinning is consistent and my fiber is split accurately, theoretically they should match up well. We shall see!

In any case, having broken my fiber up, I wrapped each strip into an easier to store nest (all starting with the same color, of course, because that’s how I intend to spin them) and then weighed each of them. If you don’t have a kitchen scale you can use for fiber prep, I highly recommend getting one. It’s one of my favorite tools! This one a friend got me and it has it’s own bowl that’s perfect for weighing fiber.

When I weighed each, I found that I had 4 that were 19 grams, 1 that was 22, and one that was 16. It made sense because one I managed to split while splitting it (if that makes sense!) and I could tell right away my split was wonky. I took a stab at pulling 3 grams off of the 22 gram piece and managed to nail it. I matched the colors up to the light strip and wrapped them into a nest as one.

All ready to spin now!

I haven’t yet decided how heavy I want to make this yarn, I’m going to mull that over while I work on a knitting cast-on. I’ll report back soon on it though! 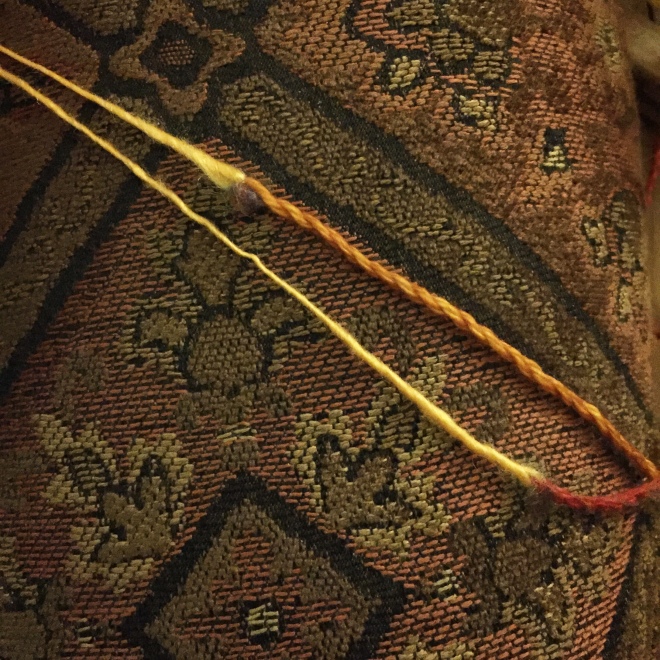 A sweater spin is done!

A quick Spinzilla prep spin after finishing my other plying project… 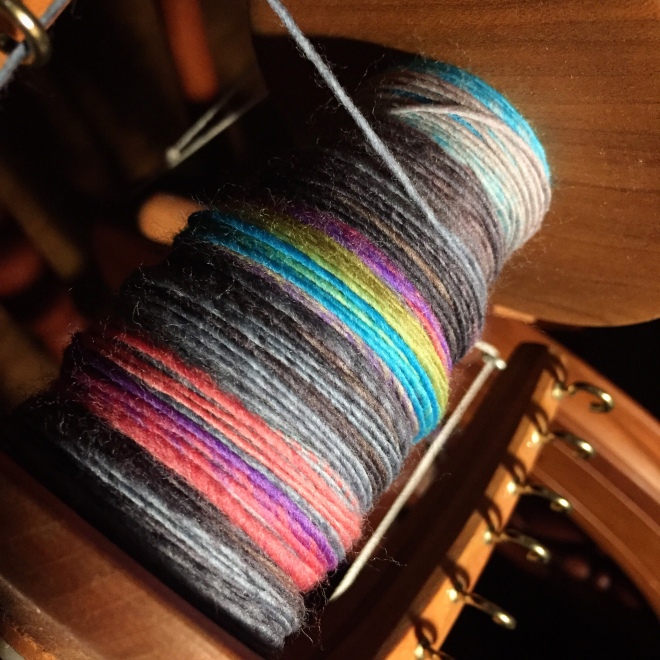